High-tech industries have long been plagued by an unseen foe. From semiconductors to medical devices, manufacturers are forced to accept high product rejection rates due to particle contamination or critical defects. Oftentimes, contamination issues and product damage in these industries can be traced back to uncontrolled static electricity. When static is allowed to build-up, it becomes a double threat to a cleanroom, increasing the chances of ESA-induced contamination and electrostatic discharge (ESD) damage.

Electrostatic attraction (ESA) is the phenomenon that causes dust to stick to the glass screen of an old vacuum tube television. When particles become statically charged by friction or contact with another material, they adhere to surfaces that have the opposite charge. While this may seem harmless in the example of the TV monitor, the semiconductor industry works on a microscopic scale where tiny particles can cause critical defects. Charged particles floating in the air can be drawn to the surface of the wafer, potentially destroying the product. 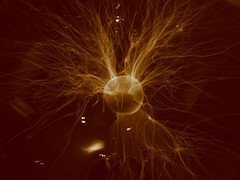 Furthermore, particle contamination issues are no longer isolated to the semiconductor industry. As an example, the sterility of medical devices is always a top priority and must be tightly controlled to meet government regulations. When production processes cause a device to gain a static charge, contaminating particles in the air and on nearby surfaces will be attracted to the device, leading to high rejection rates.

For semiconductor manufacturers, wafers are under a constant threat of damage from

electrostatic discharges. Because of the insulating nature of the wafer’s materials, any contact or separation between surfaces contributes to the accumulated static charge.

There are three types of ESD damage that can occur:

Many static control programs will implement various forms of electrical grounding to prevent personnel and equipment from generating a static charge. Grounding works by connecting a sufficiently conductive surface (like the human body or stainless steel) to a grounding point that will discharge the static into the earth. A specially-designed ESD floor combined with conductive footwear will prevent static charges from accumulating on personnel. Wrist straps wired to a grounding point will provide similar protection.

Grounding Will Not Remove Static from Insulated Surfaces!

When dealing with a cleanroom environment, 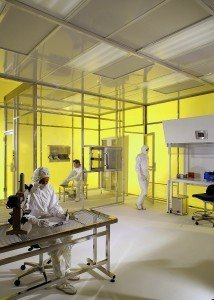 electrical grounding has its limitations. In regards to electrical conductivity, there are three categories of materials: Conductors, insulators, and static-dissipative materials. Grounding will only work with conductors and static-dissipating materials, because they are conductive enough to transfer static to a grounding point. Insulating materials, including glass and the majority of plastics, are extremely resistant to static transfer. These materials tend to generate and hold massive static charges, and they also tend to be the predominant materials in modern cleanrooms. Wafers and medical devices are commonly constructed with insulators, virtually guaranteeing a static charge that will complicate production efforts.

If it is unfeasible or cost prohibitive to change all of the materials in the cleanroom to static-dissipative plastics, as is usually the case, the only effective option left is ionization. 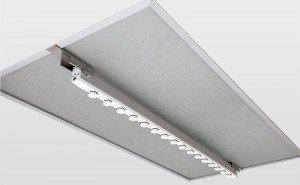 Static ionizers are devices designed to emit positively and negatively charged ions that reduce static charges to harmless levels. There are two types of ionizing technology: ionizing radiation systems and corona-discharge systems. Ionizing radiation systems are much less common because they utilize radioactive isotopes, which are strictly regulated in the U.S. by the Nuclear Regulatory Commission. Electrical ionization, using the corona-discharge method, has received wider acceptance because of its affordability and simplicity.

How does ionization work? Molecules in the air become charged ions when electrical current discharges from the tip of an electrode probe. As these ions travel through the air, they statically neutralize any oppositely charged surface with which they come into contact. This mechanism works on all types of materials, which is a key advantage over traditional static control methods.

Ionizing Bars Can Eliminate Static Throughout a Critical Environment

While a point-of-use or blower-type ionizer would be useful for eliminating static on a workbench or at a certain production point, the ionizing bar is the best choice for 100% static elimination in a cleanroom. Although ions are generated in the air surrounding the electrode probes, they need a propulsion system to reach their intended targets. By installing the ionizing bars under fan/filter units, ions are dispersed by the air flow throughout the cleanroom, neutralizing static charges on air particles and work surfaces without causing turbulence. A properly designed ionizing bar system will prevent the static build-up caused by the insulating materials and the low-humidity environment often found in cleanrooms.

Although static charges are a naturally occurring phenomenon that will never be completely eradicated, ionization bars are the ideal solution for ESA contamination and ESD damage in cleanroom environments.

For more information regarding static ionizing bars, take a look at Terra’s Ionizing Bar page or give our team a call to discuss your specific static control requirements!