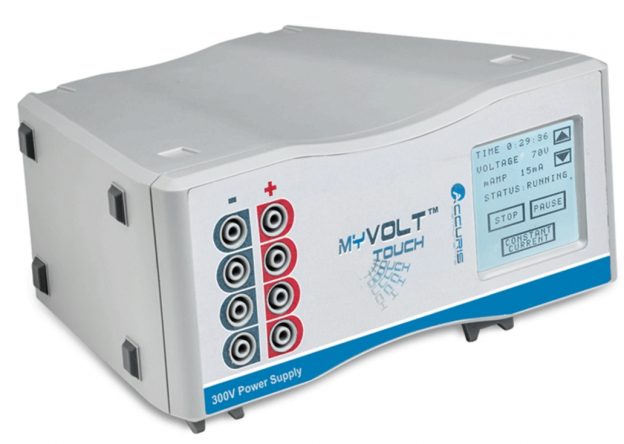 Gel electrophoresis allows for the separation of nucleic acids (DNA or RNA) and proteins based on their size. Electrophoresis is used by labs studying vaccines, medications, forensics, DNA profiling or other life science applications. The technique is also used in industry such as mining or food sciences.

Gel electrophoresis utilizes a porous gel matrix through which proteins or nucleic acids migrate. Both nucleic acids and proteins possess a net-negative electrical charge, a property that is leveraged to facilitate the migration of the desired molecule through the medium.

The gel box features a cathode at one end and an anode at the other. The box is filled with an ionic buffer, which creates an electric field when a charge is applied. Since the proteins and nucleic acids have a uniformly negative charge, the molecules will migrate towards the positive electrode. The speed of this migration is dependent on how easily the molecules move through the pores of the gel. The smaller the molecule, the more easily they “fit” through the pores, and thus, the faster they migrate.  When completed, this process results in unique bands of proteins or nucleic acids that are separated based on their molecular weight. Starting with heterogenous material, this technique is a powerful method to identify and separate distinct molecules. 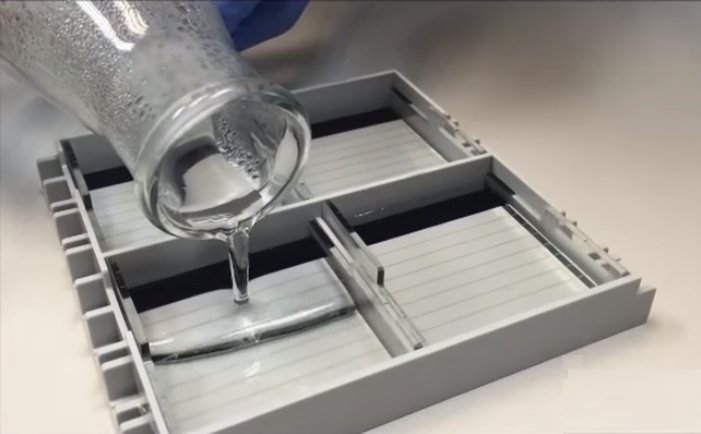 Gel electrophoresis can be conducted in either a horizontal or vertical orientation.  Horizontal gels are typically composed of an agarose matrix, while vertical gels are generally composed of an acrylamide matrix. Pore sizes of these gels depend on the concentration of chemical components: agarose gel pores (100 to 500 nm diameter) are larger and less uniform compared to that of acrylamide gelpores (10 to 200 nm in diameter). Comparatively, DNA and RNA molecules are larger than a linear strand of protein, which are often denatured prior to, or during this process, making them easier to analyze. Thus, DNA and RNA molecules are more often run on agarose gels (horizontally), while proteins are run on acrylamide gels (vertically).

In horizontal gel electrophoresis, a gel is cast in a horizontal orientation and submerged in running buffer within the gel box. The gel box is divided into two compartments, with agarose gel separating the two. As previously stated, an anode is located at one end, while a cathode is located at the other. The ionic running buffer allows for a charge gradient to be created when a current is applied. In addition, the buffer serves to cool the gel, which heats up as a charge is applied. The running buffer is often recirculated to prevent a pH gradient from forming. 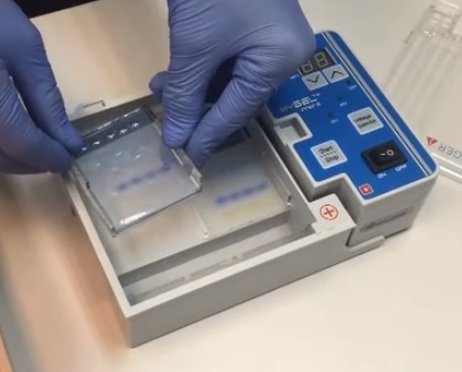 Since the two compartments of a horizontal gel system are connected through the running buffer, it is not possible to utilize horizontal systems with a discontinuous buffer system. Additionally, acrylamide cannot be used for horizontal systems because gels are cast in a tray which is exposed to atmospheric oxygen. Oxygen inhibits the polymerization of acrylamide, and thus, interferes with the creation of the gel. The ease-of-use of a horizontal system makes this an ideal choice for most DNA and RNA applications.

A vertical gel method is slightly more complex than its horizontal counterpart. A vertical system utilizes a discontinuous buffer system, where the top chamber contains the cathode and the bottom chamber contains the anode. A thin gel (less than 2 mm) is poured between two glass plates and mounted so that the bottom of the gel is submerged in buffer in one chamber and the top is submerged in buffer in another chamber. When current is applied, a small amount of buffer migrates through the gel from the top chamber to the bottom chamber.

Unlike horizontal systems, the buffer can only flow through the gel, which allows for precise control of voltage gradients during separation. When combined with the smaller pore size of the acrylamide gel, greater separation and resolution can be achieved with this system compared to horizontal systems. 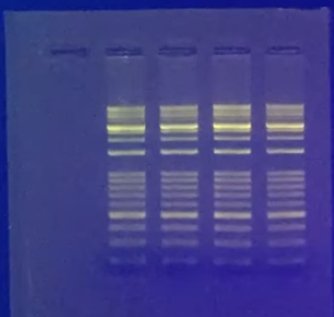 So which method should I use?

Generally, horizontal gel electrophoresis is an ideal choice for DNA and RNA separation, while vertical systems are ideal for proteins. The simplicity of use, combined with the ability to access the gel during the separation procedure, makes horizontal systems popular for separating nucleic acids. When separating similar nucleic acids (e.g. during dye termination sequencing) researchers will opt for the greater resolution of a vertical system. Thus, the nature of the molecule being separated combined with the desired resolution of the gel will determined which electrophoresis system is best for your application.

Read more about electrophoresis systems and equipment at Laboratory-Equipment.com