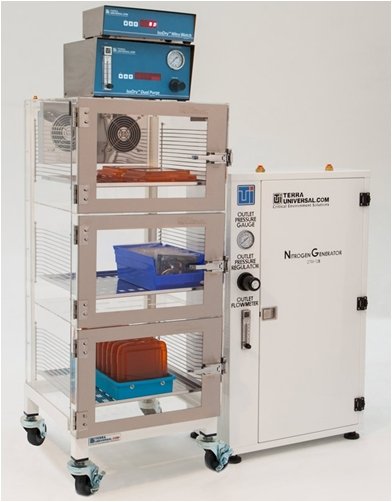 IsoDry®: The Greatest in Desiccator Design

IsoDry desiccator cabinets are the latest, patent-pending innovation in desiccators from Terra Universal. Desiccators are containers designed to reduce relative humidity (RH) for moisture-sensitive stored items, either by purging the container consistently with nitrogen, using silica gel desiccants or pulling vacuum. The IsoDry desiccators use nitrogen to accomplish this task, both in achieving and maintaining a humidity “set-point.”

How do IsoDry Desiccators Work?

Terra’s desiccator cabinets rely on a basic tenet of natural physics: buoyancy. Buoyancy is a function of density and mass between at least one fluid and another material. In our applications, it relies specifically on the fact that purified nitrogen is less dense than atmospheric air. Pumping nitrogen into an enclosed environment pressurizes both the air and the nitrogen, and the difference in densities causes the nitrogen to push the ambient air downward. RB (Relief/Bleed) valves are installed at the bottom of each cabinet column to allow the ambient air to escape and nitrogen to take its place. Inter-chamber perforations encourage gas flow between vertically adjacent chambers.

The operation starts after the desiccator cabinet is connected to a nitrogen source and ambient air is purged, achieving the required humidity level. This utilizes the Dual Purge™ module, which automatically regulates the nitrogen inflow based on changes in pressure, usually the result of an opened door. With all doors closed, the module instates a slow, constant purge to maintain the RH set-point; when a door opens, it activates a high-flow purge to lower the RH and prevent as much backflow into the cabinet as possible.

The NitroWatch™ module works in tandem with Dual Purge to automatically achieve and maintain a constant, programmable humidity set-point in an efficient manner, without needlessly wasting nitrogen. These systems work together to prevent ambient air from rushing in when a door is opened by maintaining just enough positive pressure to purge air out, and yet not strain the cabinets or doors. While the doors are closed, it serves to combat the hygroscopic effects inherent in the polymer construction with lower, optimal pressure.

(It should be well noted that, although any source of purified nitrogen will work, Terra Universal nitrogen generators are specifically catered to desiccator and other laboratory needs; this blog post assumes the operator is using a constant, reliable flow of 97% pure, or greater, nitrogen for this application.) 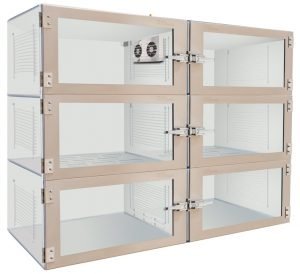 What We’ve Discovered About this Operation

Though Newtonian physics sees this function of buoyancy as perfectly sound, real life is much more complex than equations on a chalkboard. The truth of the matter is that it is near Impossible for an inert gas such as nitrogen to evenly push out ambient air. First, ambient air is already composed of around 78% nitrogen, with 21% oxygen and the rest made of trace components. When nitrogen is introduced to environmental air, the two will readily mix, rather than remain separate. Instead of pushing air out, the increasing pressure pushes a mixture of air and nitrogen out of the RB valves; the denser air isn’t displaced by the nitrogen, but rather the whole mixture is bled via pressure.

This by itself is not a major problem, as this strategy still creates an efficient system of desiccation. The time it takes for the system to regain equilibrium between door openings (known as recovery periods) is fair, as is the nitrogen consumption. But could it be yet more efficient? 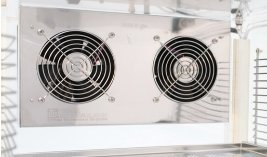 Embracing the fact that the nitrogen mixes with ambient air inside the cabinets, Terra has introduced the Gas Dilution module: a fan and plenum mixing system that evenly combines the existing air inside the cabinets with purified nitrogen before evenly distributing it through the rear or central plenum. This air, now enriched with nitrogen, is much drier than the ambient air. The gas flow flushes out the ambient air upward instead of downward through the cabinet column. Throughout the cycle, some will bleed out of the RB valves, along with its moisture, and the rest will re-enter the Gas Dilution module to recirculate through the cabinet with more nitrogen.

This cycle of distribution and enrichment rapidly dilutes the ambient air with nitrogen gas until the system has been mostly purged of the moisture-carrying oxygen. The result is increased nitrogen efficiency and shorter recovery periods between cabinet door openings.

IsoDry desiccator cabinets are an exciting addition to Terra’s family of desiccators. Like our Smart Desiccators, IsoDry steps-up the level of sophistication to meet the needs of an evolving industry. With the combined efforts of the Dual Purge and NitroWatch control systems, IsoDry desiccators require little attention from lab operators, who can “walk-away” to use their time more efficiently. The desiccator system takes care of its contents with little monitoring necessary. Whatever the application, lab operators can work more freely in the lab knowing that their sensitive samples are free of moisture and particulate contamination.