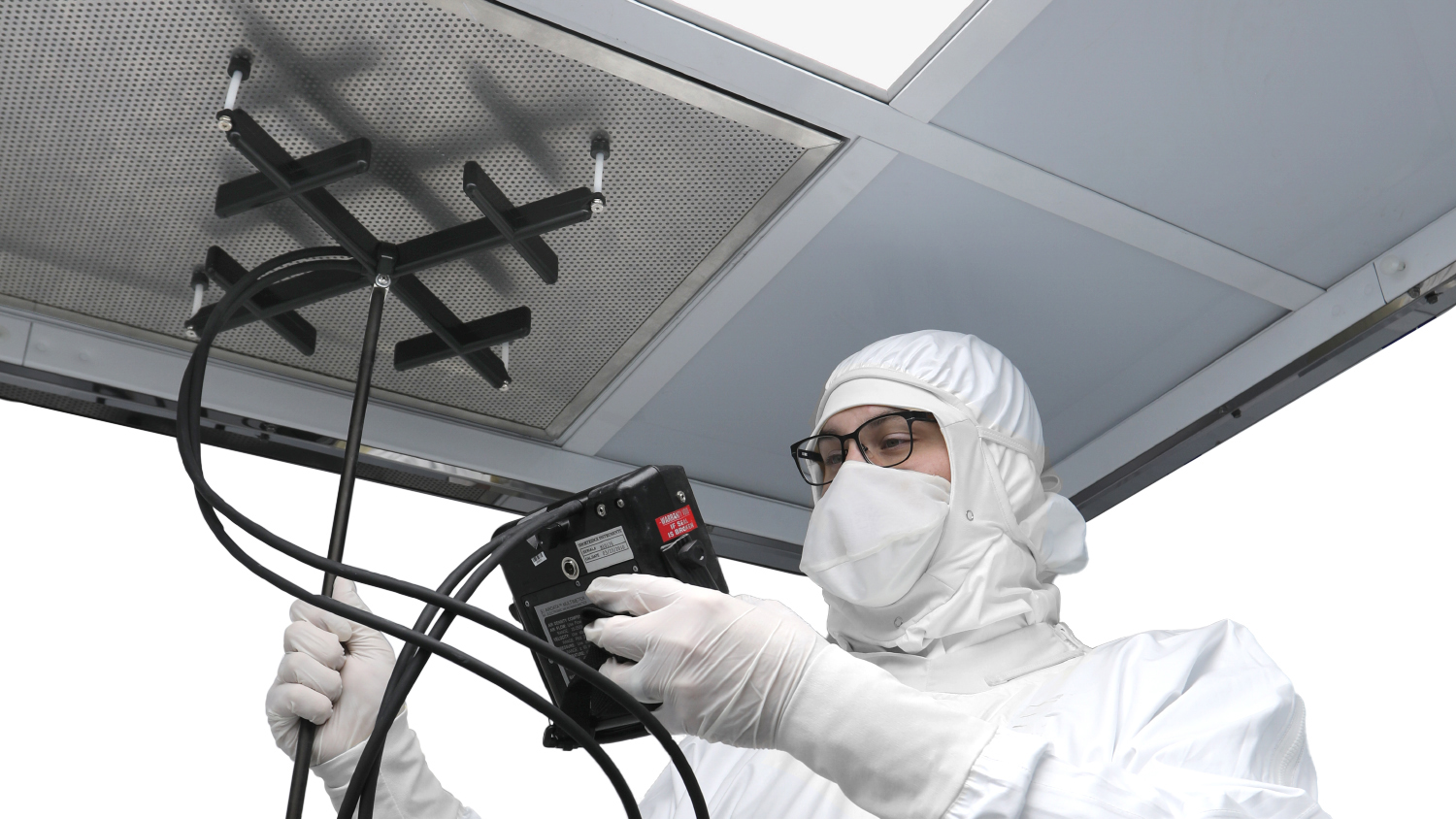 Cleanroom Fan Filter Units (FFU) play a critical role in the cleanliness and pressure control of a cleanroom. Without them, you cannot meet your ISO requirements or maintain the cleanest possible room. Keep reading to learn more about the role that air plays, how many FFUs are needed to achieve your goals, and what “balancing” is all about.

What is laminar airflow? Studies in the 1960s proved that downward displacement (uni-directional) air was more effective in controlling contaminants than turbulent air. Turbulent air stirs up particulates, making cleanliness harder to maintain. The fans driving laminar flow are effective in controlling speed and direction of clean, filtered air, forcing contaminating particles into plenums for either outside disposal or recirculation back through a filter. Laminar flow air can be horizontal or vertical; fans are needed to force air in a uniform direction, at a uniform speed. Due to particulate standards and fan/filter unit (FFU) coverage, higher ISO Classes (6 through 9) allow for some turbulent air in the controlled environment. This is typically seen closer to the ceiling, resulting from “dead air space” occupied by lights and ceiling panels. Laminar air from FFUs helps to normalize any turbulence several feet away at the work-surface level, so any negative effects are minimized.

The presence of laminar flow hoods, gloveboxes, furnishings, and equipment in the controlled room will have an effect on the air’s laminarity. All obstacles create a break in the directed uniform air flow, causing turbulence. Thoughtful placement of these obstacles, along with air testing and necessary re-balancing, will help reduce this effect.

Air flows naturally from areas of high pressure to areas of low pressure. Within a cleanroom, leaks and cracks often manifest in areas where air moves from one side of a barrier to another, based on this pressure differential. Tests to help identify these breaches include:

Cleanroom Smoke Testing – a simple way to visualize the flow path of the air. Be sure to do this with the fan filter units turned on (operational conditions) 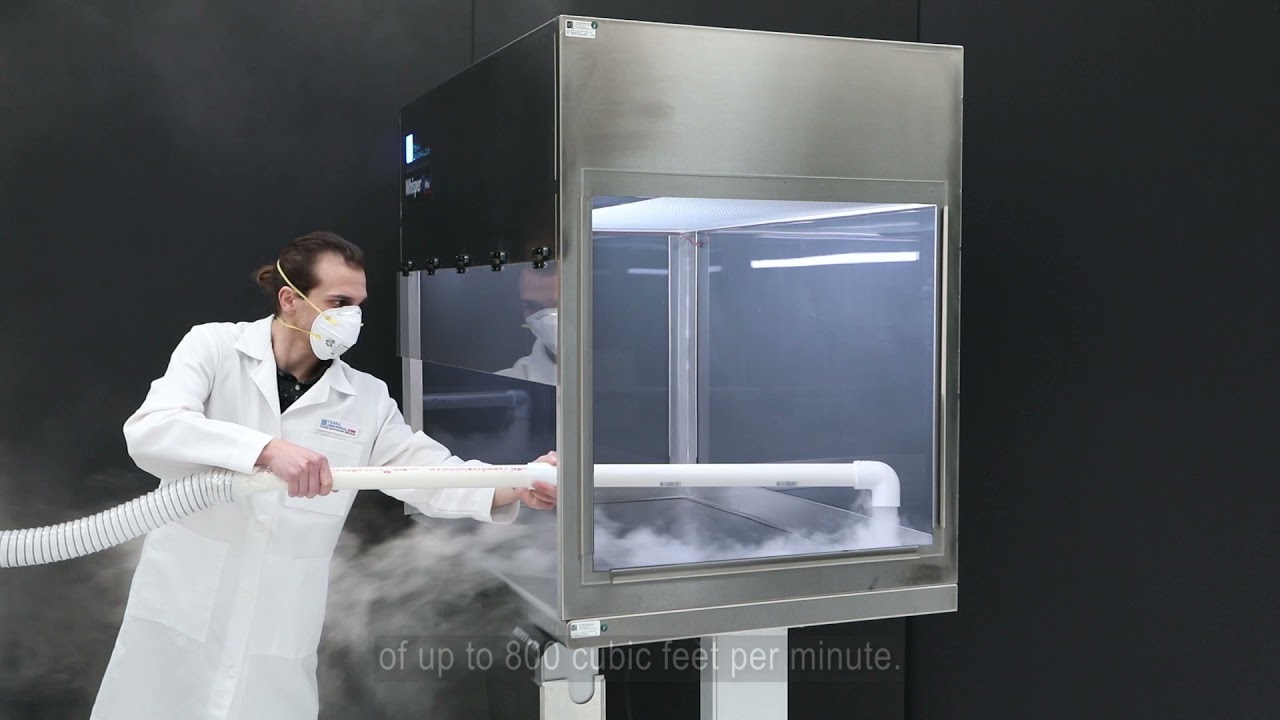 Cleanroom Particle Counting – with a handheld particle counter, measure at filter face, work surface and several other areas of the room, paying particular attention to wall and ceiling panel seams. Increased readings will alert you to leaks in the filters, or cracks in the panel.

Streamers – nylon or other lightweight thread or tape can be used to determine airflow, and identify cracks and leaks. Tie them to something stationary, or hold them up by one end to see what direction they stream.

Cleanroom Air Flow Meters – test air velocity in a similar manner as particles: filter face, work surface and other random areas of the room. It’s reasonable to get higher readings at the filter faces and lower readings directly under ceiling panels, but by the time the air gets to the work surface, air should normalize to a consistent speed and direction.

Magnehelic cleanroom pressure gauges are a standard feature for all Terra cleanrooms. Cleanroom differential pressure gauges measure the difference of air pressure between two areas that share a wall.

Photohelic cleanroom gauges provide the same features and accuracy of a Magnehelic gauge, but also function as switches that can control high and low pressure limits for blower controllers.

You’ll get very different readings for these tests if performed in a strict cleanroom (ISO 3) compared to a cleanroom with less stringent requirements (ISO 8). In some rooms, FFUs are present in all ceiling bays, so no turbulence should be expected. In rooms with cleanroom ceiling and light panels, FFUs are spaced evenly apart to decrease air’s normalization time.

In larger rooms, the floor, wall and ceiling plenums are often used to recirculate air. Air from the positive pressure room will want to flow into the lower-pressure plenums. Baffles in FFUs and wall panels are also designed to direct the movement and speed of air. Smaller rooms may use a single-pass system where filtered air exits via floor louvers.

Laminarity is achieved if air flows in the same direction and at the same speed. Air balancing is necessary to maintain this ideal scenario.

The goal of air balancing is to reduce these variables so that the air reaching the work surface is laminar. Air balancing is achievable either by manual or automatic methods.

When you work in a multi-chamber cleanroom, you likely have a gowning area and some pass-throughs (also known as airlocks). In each dedicated chamber, room pressure should be carefully monitored.

In many cleanrooms, doors act as both an entrance and an exit for workers to gain access to the room and then leave. In larger, more complex, designs, there may be dedicated doors or hallways for entry, with separate exits. These serve as additional precautions for workflow efficiency and contamination control.

Pass-throughs are installed in walls and used to transfer material between rooms of differing cleanliness levels. These buffer zones act to acclimate the materials to the new environment and discourage the movement of contaminants.

When air is forced out of FFUs in a positive-pressure cleanroom, the speed needs to be fast enough to carry the air in a unidirectional path toward the floor. When some ceiling bays do not contain FFUs, turbulent air can be expected toward the top of the room. Additionally, if FFUs are set at different speeds, or if some filters are more saturated with contaminants than others, there could be an uneven flow of air. Cracks and leaks can also cause air imbalance; regular testing using particle counters and air velocity meters will help spot these problems.

Tip: Have airflow monitors on hand to check your work.

Cleanroom monitoring systems are quickly becoming a feature expected for modular cleanrooms, especially given the CGMP and GLP requirements for environmental reporting.

Cleanroom Air handlers: Depending on the set-up of the room, and your application, filtered exhaust fans, and ventilators allow precise regulation of negative room pressure.

Cleanroom AC and Variable Air Return units: Air conditioners are used to maintain a comfortable, constant temperature. These are usually located in a corner or on one side of the room, so use ducting to distribute the cool air equally to all FFUs. In larger rooms, add a variable air return (VAR) system to the outside of your room to help balance the distribution of cooled air originating from the AC; utilize ducting to connect to FFUs in the ceiling. Be sure that the return ducts are large enough to keep air moving slowly, avoiding “edge turbulence”.

Cleanroom Plenums: Air is efficiently recirculated through pre-built spaces behind walls, under floors, and above ceilings. Baffles and other openings draw the room air into these plenums to be fed back through the FFUs, mixed with a controlled amount of “fresh” make-up air. Plan for plenum space during initial room design

Cleanroom Ducting: Use ducting to connect air sources to your FFUs. Care must be taken in the size of the ducting; if it is too small, the air is restricted and static pressure increases. A typical diameter for a cleanroom is 12 inches. Also, try to keep the ducting in straight lines to avoid static pressure. Ducting require space above ceilings; plan for this during construction

Cleanroom Baffles/Dampers/Air Return Registers: Openings in walls help to direct air into rooms (via plenum or air return spaces) for recirculation. They can be adjusted for balancing: allow more, or less, air to get through

Cleanroom FFUs: Adjust FFU speeds to compensate for filter saturation and other room dynamics that create imbalances. For rooms with multiple FFUs, it’s best to space them apart evenly so that the mix of laminar and turbulent air will normalize by the time it reaches the work surface.

Cleanroom Energy-saver devices: Arm yourself with an automated way to adjust FFU speed, air handler settings, and air conditioners. This is much easier and faster than making manual adjustments, but also more expensive.

Shop Terra Universal Products Online for immediate pricing or configure your components and accessories for quoting.

Contact a Terra Sales Specialist via phone, webchat, or email for help with configuration, large purchases, and application expertise.