For applications requiring UL-listed products, you may request a declaration of system listing under UL File E472687 at the time of order, which covers all high-voltage Modular Cleanroom electrical components integrated into Power Distribution System. This Declaration of UL listing helps meet municipal and other permitting requirements that may apply, while ensuring the safety and integrity of electrical components.

Terra cleanrooms are designed to meet a specified ISO cleanliness rating while in use: with operations in progress, process machinery humming, and personnel in motion. So why maintain that level of performance when a production shift ends and personnel leave for the day?

A cleanroom at rest maintains its target ISO cleanliness standard with much less airflow, fewer air changes—and decreased power consumption. Terra’s Night Service Switch activates a separate operation circuit that drops all Fan/Filter Units (FFUs) into low-energy operation mode, shaving 25% of energy costs from your power bill while maintaining uninterrupted cleanroom performance at your specified cleanliness level (see chart below). With Terra's Night Service Switch, operators can save up to 7,000 kilowatt-hours per year based on a cleanroom system utilizing 10 FFUs. 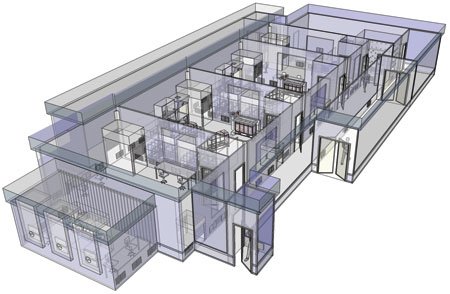 Larger cleanrooms can be partitioned into multiple cleanroom space of different ISO classifications. The double-wall panel design allows BioSafe cleanroom walls to function as either interior or exterior walls, offering an equally clean surface on either side. Modular construction allows our engineers to more easily develop a custom solution at a reasonable price. Installation procedures also remain the same, resulting in fewer errors and delays.

For a higher degree of protection against contamination, personnel should enter a critical processing cleanroom through another controlled environment whenever possible. HEPA-filtered “buffer” rooms or hallways reduce particle counts immediately outside the cleanroom, lessening the impact of airflow turbulence caused by doors opening into the cleanroom. These clean corridors can also protect carts filled with work-in-progress as they move between processing rooms, such as when moving from quality assurance to the packaging phase. Gowning rooms often act as an anteroom, providing a space to transition from unclassified to controlled. For more functional transition options, see Terra’s air showers and tunnels, which use high-velocity air streams to remove loose particles from cleanroom garments prior to entry.