How Do LED Lights Save Money?

Light-emitting diodes, more commonly referred to as LEDs, are semiconductors that emit light when an electrical current is applied to the component. Even though LEDs have been around since the early ‘60s, it is only in recent years that white LED bulbs have become more commonly used as a substitute for other industrial and household lighting systems. Their rising popularity is due, in part, to the positive impact they have on energy-efficiency.  Find out how LED lights are saving the planet, one lumen at a time.

In the United States, EISA (Energy Independence and 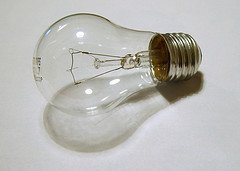 Security Act of 2007) banned the production of incandescent bulbs in order to move towards a more energy-efficient country. The act, passed by the Department of Energy (DOE), requires less electrical output per number of lumens (units of emitted visible light) produced, compared to previously used incandescent light bulbs. Under title 24 of the California Energy Code, stricter building standards and energy-saving requirements were also passed, which include lighting. In compliance with these energy codes, the phase-out of standard incandescent bulbs has caused a higher demand for fluorescent and LED lights, especially in labs and cleanrooms where saving energy is  critical for budget-conscious facilities.

According to a DOE article, fluorescent and LED lights produce a higher amount of lumens at a lower wattage than an incandescent; when comparing performance, standard A-19 incandescent bulbs produce 10-17 lumens per watt, whereas cool LEDs emit 60-94: a similar lumen level to fluorescent bulbs. Cool LEDs produce a white or blue light, depending on the CCT (correlated color temperature) measured in Kelvins. Warm LEDs that have a much lower lumen/watt performance (27-88), produce a softer, yellow light. See Figure 1 for a visual example.

Light direction also impacts the efficacy. LED bulbs are unidirectional; a higher percent of the light is emitted directly out from the bulb, while nearly half of tubular fluorescent bulbs’ omnidirectional light is released up into the fixture.

Since LEDs have lower energy consumption, they also produce less heat. Rather than radiating concentrated heat, the warmth that they do generate dissipates into the surroundings, to be quickly blended with, and cooled by, the environmental air.  This reduces the burden placed on the AC unit of your controlled environment. Personnel can work more comfortably while simultaneously decreasing cooling costs.

The Color Rendering Index (CRI) classification of an LED is comparable to those of fluorescent and incandescent lights. The CRI measures a light’s ability to accurately represent an object’s genuine color compared to a natural or “ideal” light source. Dependable perception and interpretations of a material’s physical characteristics may be critical to specific lab applications. An LED light accomplishes this natural light reconstruction while saving energy and the associated costs.

Fluorescent bulbs are estimated to last a minimum of 7,000 hours. Over the 25,000-hour minimum lifespan of an LED bulb, you would likely have replaced a fluorescent bulb three times. Since fluorescents contain a small amount of mercury, it is required by law that the bulbs be recycled or disposed of as hazardous waste.  Proper disposal can be a hassle as the depleted bulbs must be taken to an authorized recycling or hazardous waste facility.

Also consider that LED lights are estimated to function for up to 50,000 hours—that’s about 24 years of Monday-through-Friday 8-hour shifts!  While LED bulbs are initially more expensive, they are a smart long-term investment due to their endurance, low-maintenance, and performance. 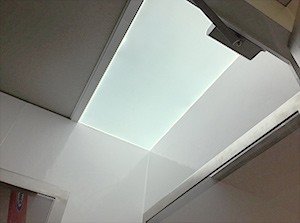 Terra Universal offers cool LED light panels and strips. The LED light panel is a fully sealed module suitable for positive- or negative-pressure rooms and compatible with ISO 3 to 8 standards. Seams and crevices are eliminated in this design, creating an ideal lighting unit for biopharmaceutical clean rooms. With the LED light strips, laminar air flow is not obstructed as the lights are mounted directly onto the ceiling grid that separates each panel or FFU (fan/filter unit). Lumen output for these double-stacked strips is slightly greater than the 2’ x 4’ LED panels, and also meets ISO 3 cleanliness standards.

What else can LED lights do? With a lower kW/hr consumption rate per year, LEDs produce less carbon dioxide (CO2) than both incandescent and fluorescent bulbs. Of the greenhouse gasses produced from human activity, the principal offender is CO2. Although an LED bulb may initially cost more, it’s clear that over the course of time, LEDs will not only save your wallet, but also leave a more positive environmental impact.