How to Save with Room-side Replaceable Fan Filter Units

What is a Cleanroom Fan Filter Unit? 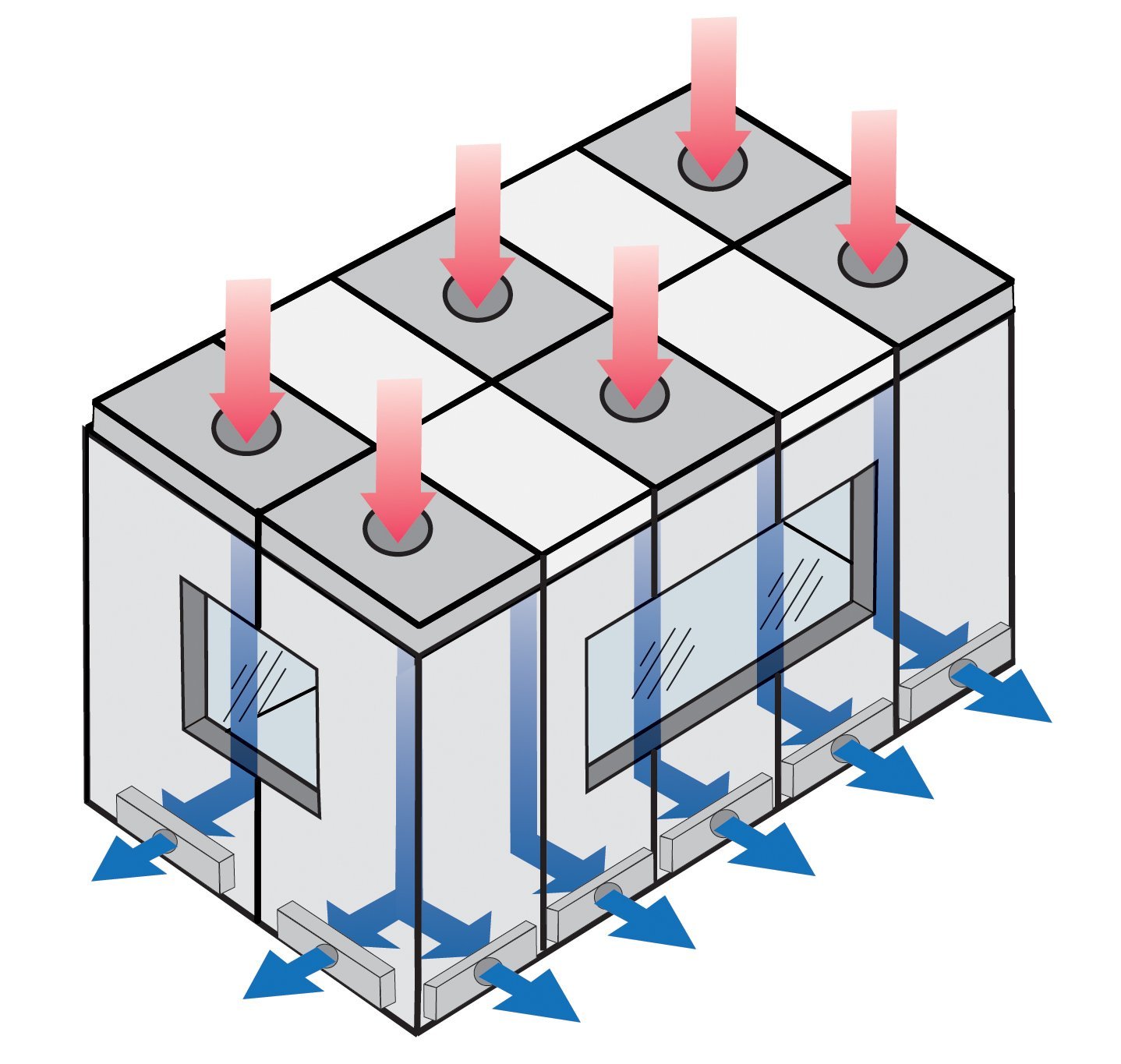 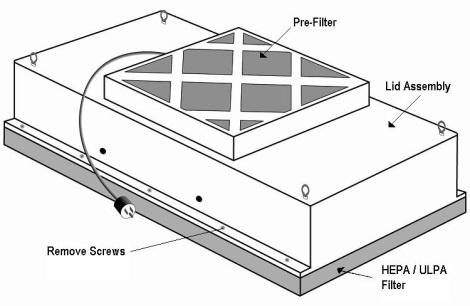 Terra manufactures and stocks HEPA filter fan units for every application. Each design offers advantages for specific applications. Standard FFUs offer the lowest cost option and are ideal for small scale and less critical cleanroom operations. However they have an unfortunate disadvantage when installed to a cleanroom. In order to change the filter, the bulky unit must be entirely pulled out of the ceiling bay. Climbing up to remove the bulky FFU can be difficult, dirty, and hazardous. The procedure may require tall ladders, multiple people, personal protective equipment, and perhaps worst of all, shutting down the cleanroom.

The cleanroom filter replacement process for top-side replaceable FFUs can put a complete stop on your cleanroom operations because the room suddenly lacks a functional ceiling. Dust and contaminating particles can pour in freely from the outside compromising the cleanroom’s cleanliness rating. In most cases, cleanroom operations halt until filters are changed and all HEPA filter blowers return to functional status.

Once the fan filter modules are placed back into the ceiling, depending on the required cleanliness classification, the cleanroom may need to undergo multiple step cleaning procedures with germicidal, fungicidal and sporicidal surfactants. Once these steps are complete, the air change rates can then be re-checked and recertified to fully restart cleanroom production. For critical operations, this type of shutdown could not only cost a fortune from lost time, but compromise cGMP operating standards and safety. 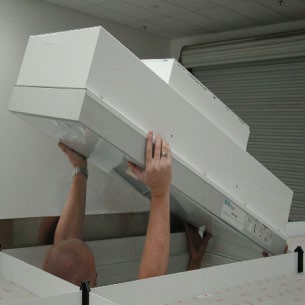 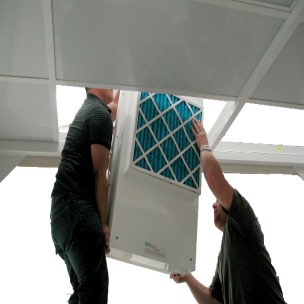 The Benefit of a Room-Side Replaceable Fan Filter Unit 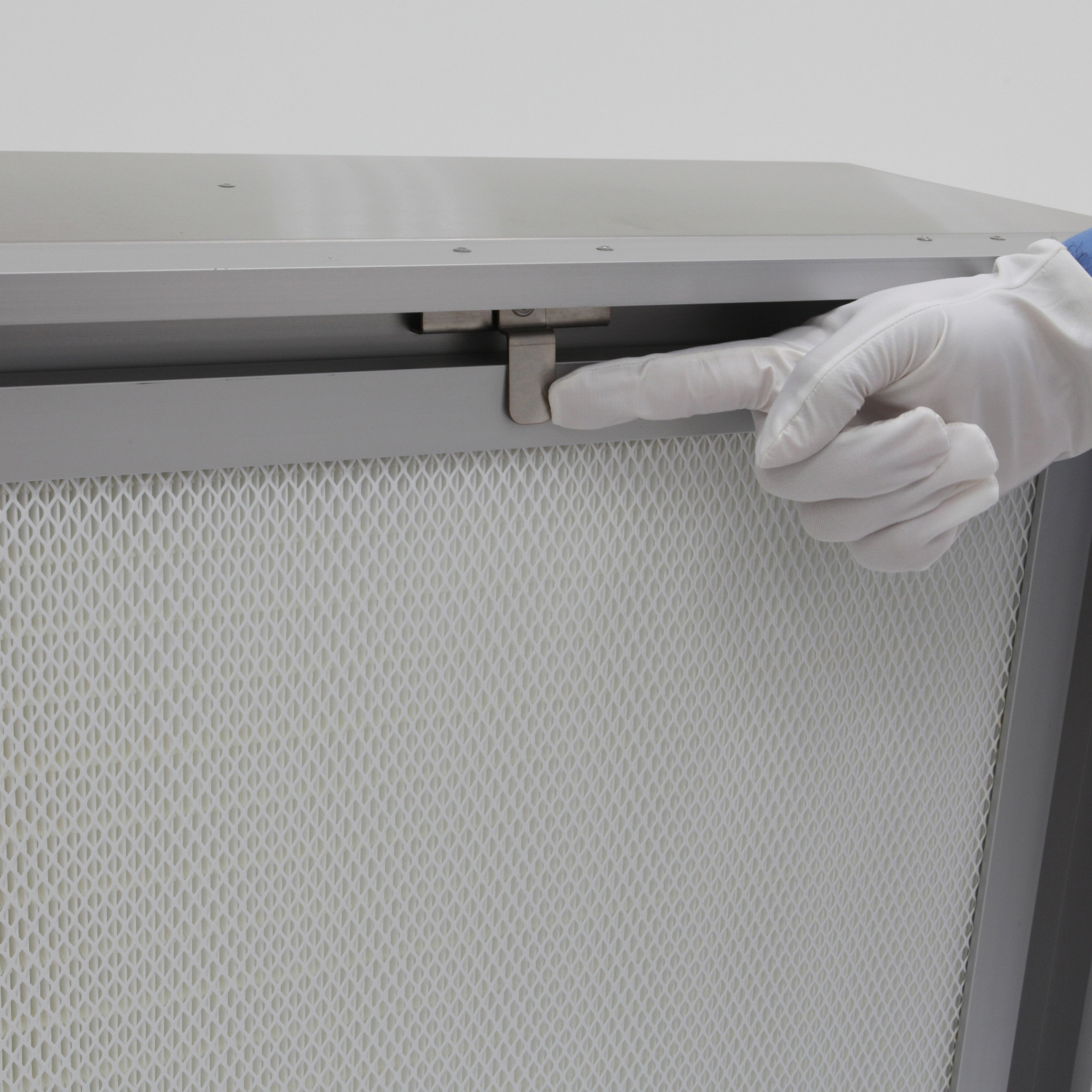 Room-side replaceable (RSR) FFUs drastically simplify filter replacement to keep your cleanroom operations running smoothly. The HEPA filter of an RSR FFU is designed to be replaced from within the cleanroom, without dismantling the entire FFU. Filter replacement may still require a cleanroom ladder, but can be completed by 1 person; simply twist the retaining tabs to change out the filter, rather than pulling the entire FFU apart from the ceiling grid. With the fan filter unit still fixed to the ceiling, as long as other FFUs are running while one filter is being changed, the room can maintain positive pressure and keep outside contaminants from entering the space. This simplifies the filter changing process and minimizes downtime of your cleanroom operation.

Air change rates can then be tested after a filter change to double check conformance to the desired ISO Class. For more stringent cleanliness requirements, an inspector may still need to audit and recommission the space before the room can be made operational.

To make filter changes even easier and avoid unexpected cleanroom shutdowns, Terra offers a filter replacement alarm to monitor the HEPA fan filter unit’s back pressure and issue an alarm when the filter is due for replacement. Challenge ports are also available to simplify filter leak testing of the cleanroom hepa filters.