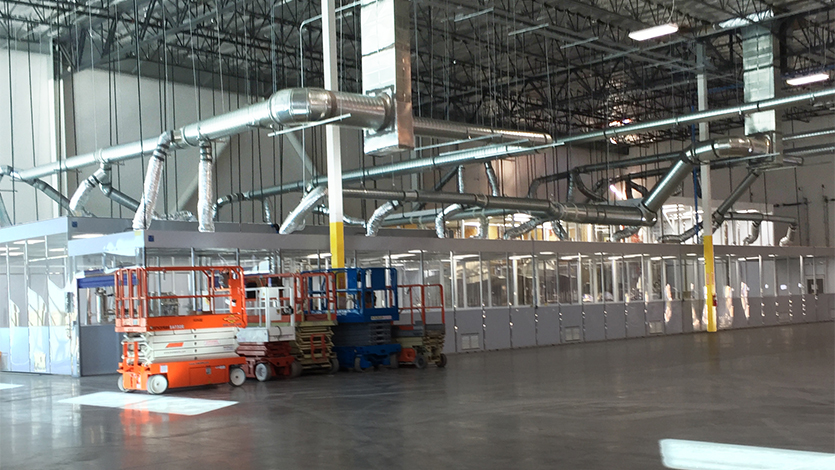 In the United States, ISO 14644-1 is regarded as the gold standard for cleanroom construction. Cleanroom standards help define and measure expected outcomes but do not always provide a clear roadmap on how to achieve them. In parallel, GMP, IEST, USP, EU, and ASHRAE standards may provide more specific methodologies for air quality classification, testing equipment, and validation methods.

Biotech, medical devices, and pharmaceutical cleanroom environments are heavily regulated. However, each product is unique, as well as the workflow and equipment required for its manufacturing. Each facility will benefit from the help of a cleanroom construction specialist when designing and constructing the ideal cleanroom for specific product sensitivities and workflow considerations.

First, let's start with the basics. Then, we’ll address specific scenarios you'll want to consider when planning and constructing a cleanroom HVAC system.

Hardwall cleanrooms can either be connected to the existing facility HVAC system or installed with a dedicated modular system or auxiliary central air system.

An existing high-volume air conditioning (HVAC) system provides the most effective and economical means to cool your modular cleanroom. Because filter/fan units (FFUs) draw air from the surrounding room, they pass cooled air directly into the cleanroom without the need for ducting or special exhaust systems. The additional load on an existing HVAC system can be calculated by adding the heat dissipated by the specified number of FFUs (at approximately 1,000 BTU/hour/unit) and by equipment and personnel inside the cleanroom.

These modules can provide economical cooling in facilities without adequate HVAC. The size and type of system are based on the cleanroom size, desired temperature, and heat dissipated inside the cleanroom. In these applications, heat removed from the cleanroom is vented into the room outside. In the case of large cleanrooms and/or significant heat-generating equipment, this vented heat will raise the ambient temperature and place a greater load on the A/C modules as well as any existing HVAC system. For the most efficient operation, exhaust ducts and ventilation fans should be installed to vent heat outside the facility.

In large modular cleanrooms, a split AC system, which moves the heat-generating compressor outside the facility, is preferable to the AC modules. In such applications, your facility can get a ducting and recirculation system that routes exhaust air to the AC system, delivering cooled feed air to the ceiling FFUs in an ample volume for maintaining the desired internal air velocity. Also, consider working with a local AC contractor to connect this recirculation system to a central air unit that meets cooling requirements and local codes.

Ducts and vents direct air in a prescribed direction and speed. We realize the importance of these building features when one is closed or becomes blocked; the air becomes stifling and the temperature uncomfortable. In a controlled environment, more than comfort is affected; cleanliness or safety suffers. When the amount of make-up air is not sufficient, CO2 can also build up, endangering the health of workers. A good rule of thumb for make-up air: plan to add 10 CFH per operator.

Ducting connects AC and variable air return units to FFUs for temperature control and balanced airflow. In rooms without plenums, ducting is the most efficient way to recirculate the air. The typical size for cleanroom ducting is 12 inches in diameter. Small rooms are good for ducting while plenums are more effective in larger rooms.

Both plenums and ducting will require space above the ceiling or behind walls (depending on design). Ducting is slightly less efficient than plenums, but also less expensive in negative-pressure containment rooms (e.g., BSL cleanrooms). For negative pressure environments, ducting is critical for the safety of the facility since it exhausts air to the outside environment.

Keep ducting in straight lines to reduce the build-up of static pressure – the more resistance (bends in the ducts), the greater the pressure build-up and overall efficiency declines.

Vents relieve pressure or provide a way to remove noxious or hazardous fumes and vapors. Vents can be manipulated to allow more or less air through them while baffles help to direct air or control the volume (and therefore speed).

The aerodynamic performance and cleanliness of a cleanroom environment are largely determined by containment integrity, room pressure, and the efficient introduction/removal of air via the HVAC system and fan filter units.

Air leaks caused by gaps, cracks, doorways, and windows are expected in positive pressure environments and must be considered when determining air supply requirements.

Pharmaceutical and hazardous environments face greater adversity when designing and managing cleanroom construction processes and component integrity. The manufacturing, delivery, and installation processes are likely to present some degree of apertures and cracks invisible to the naked eye.

As leakage rates increase, the air supply rate must also increase to maintain minimum air change rates and preserve the pressure differential; as air delivery rates increase, so do the associated costs of heating, cooling, and delivering supply air.

Terra's Modular Negative Pressure Rooms offer a high-performance, efficient, and non-invasive cleanroom construction option that circumvents many of the containment challenges suffered by stick-built rooms. Modular containment rooms are freestanding structures that combine gapless panel construction, a self-supporting ceiling grid, and a sealed plenum that routes air from the fan filter units to a dedicated exhaust or outdoor area.

Modular design and self-contained systems simplify modifying or retrofitting an existing space with a containment room, especially for facilities with limited space, low ceiling heights, or dense electrical and HVAC utilities. Not only are these systems more efficient to install and maintain, but they are specifically designed to promote consistent, predictable airflow delivery. These rooms offer extraordinary design freedom and specialty configuration for handling toxic, antineoplastic, pathogenic, or powder-based contamination.

The design, mounting, and operation of cleanroom doors is an important consideration for maintaining cleanliness and pressure differentials throughout parallel areas. Door operations are a factor when evaluating potential contamination sources under working conditions. Studies show that cleanroom doors prevent airflow equalization when opened more slowly.

"Thus, it was noted that the door should not be opened rapidly. Similar conclusions can be found in [14] where it is pointed out that the negative pressure gradient may have been transiently reversed if the door-opening motion was too rapid, and sliding doors were recommended instead of hinged one." (www.ncbi.nlm.nih.gov - 2005)

Studies also show that the temperature and density of the air, the velocity of the door opening, and the angle to which the door is opened also affect the ability of a cleanroom door to control contamination. The Journal of Hospital Infections demonstrated the ability of doors to create disturbances in negative pressure cleanroom environments, leading to the escape of airborne hazards and bioaerosols.

Terra manufactures a variety of cleanroom-suitable doors, including both sliding- and swing-type doors, along with special features such as automatic openers and retractable door sweeps designed to protect the cleanroom environment.

Cleanroom air pressure balancing is a process that establishes a specific room pressure target after compensating for exhaust air and room leakage.

Critical applications require higher thresholds of pressurization between outside areas and interior rooms. A critical room (sterile or hazardous) may require a pressure difference of up to 15 pa (0.6 inches water), while non-critical rooms may only require 7 - 8 pa (0.28 - 0.32 inches water). In most cases, cleanrooms that require more than 0.3 inches water between parallel rooms will require an airlock or area of intermediate pressure between them.

A cleanroom facility often includes multiple rooms or partitions, each with a specific purpose and respective air quality requirement. Cleanroom construction projects may include both classified and unclassified areas.

When ISO-classified environments are connected or share a wall, the airflow and pressure levels in each room must be designed to avoid contaminating any adjacent rooms. The simplest approach to this problem is to implement cascading pressure differentials. 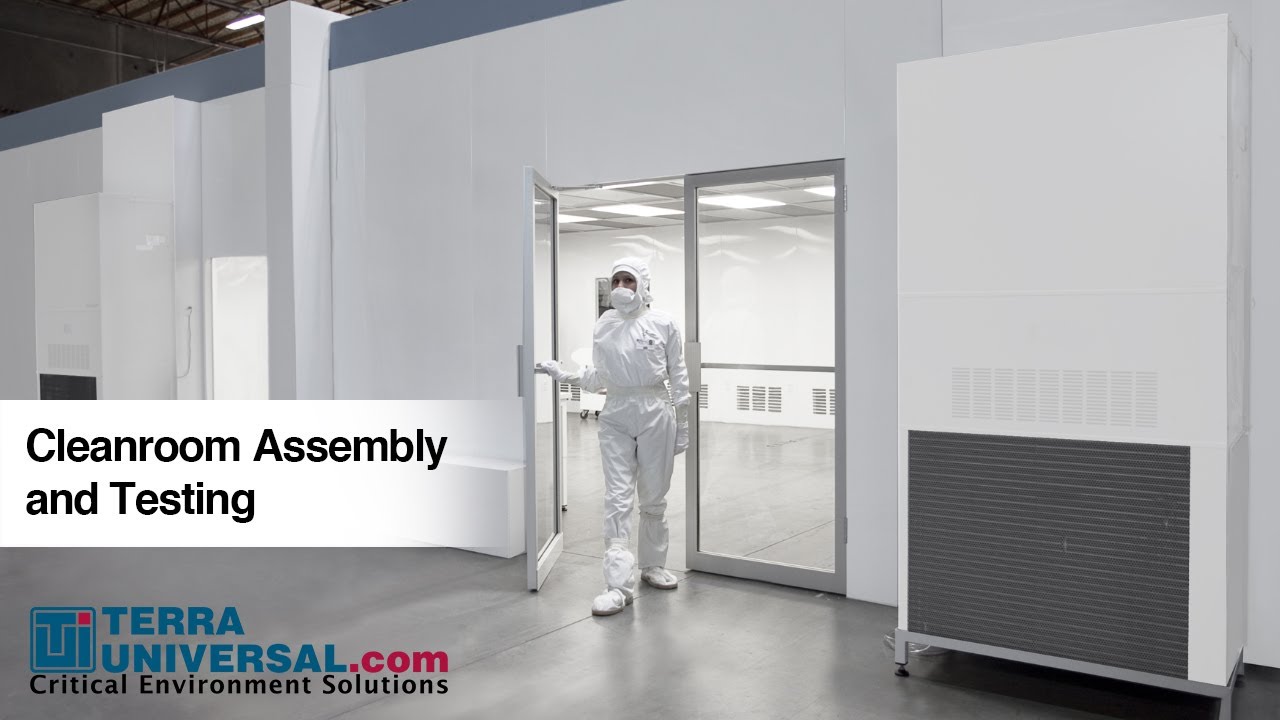 An Introduction to Cascading Pressure Differentials

In a multi-cleanroom suite, the greatest pressure differential occurs when the cleanest ISO-classified rooms share a wall with the surrounding unclassified environment.

In the case of modular cleanrooms, larger pressure differentials are achieved by adding more fan filter units, or by increasing the CFM of each fan filter unit. Each successive cleanroom along the path of traffic should have a higher overall pressure than the preceding cleanroom. 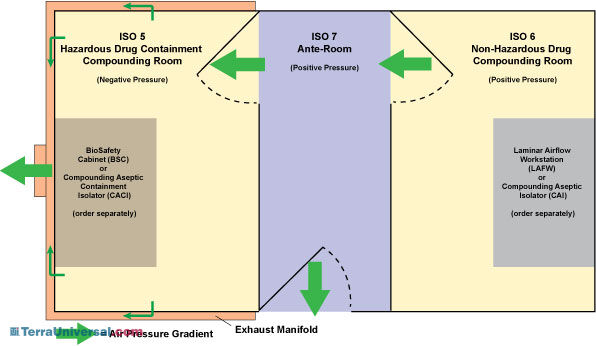 As the differential between two rooms increases, so does the occurrence of turbulence or eddies that disrupt laminar flow. Cleanroom designs must strike a balance between pressure levels and turbulence levels to provide the optimal environment for their application.

Related: 5 Questions to Ask When Designing a Cleanroom

Terra Universal has over 40 years of experience in designing and fabricating modular cleanrooms that meet the needs of a wide range of industries. If you need a cleanroom space for your operations, please contact one of our product specialists who can provide a solution tailored to your application. Our experts are available by phone, live chat or email to answer your questions, or you can start browsing our modular cleanrooms here.